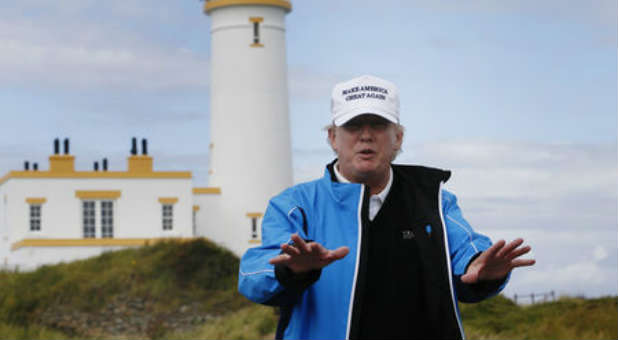 As the Paris terrorist attacks took center stage in the presidential campaign, Donald Trump said he would “strongly consider” shutting down mosques in the United States.

“Well, I would hate to do it but it’s something you’re going to have to strongly consider,” Trump said during an MSNBC interview. “Some of the absolute hatred is coming from these areas … The hatred is incredible. It’s embedded. The hatred is beyond belief. The hatred is greater than anybody understands.”

Trumps remarks follow a statement by France’s interior minister that he would pursue the “dissolution of mosques where hate is preached” in response to last week’s attacks that killed at least 129 people and left many more wounded.

As the Islamic State claimed responsibility for the attacks, describing them as “the first of the storm,” the focus of the presidential campaign shifted to questions about what the candidates would do to protect America.

If he were to be elected president, Trump said surveillance of mosques is something he would “watch and study” because “a lot of talk is going on at the mosques.”

“I believe we need to put a lot more pressure on the clerics, the imams, to make a very distinct line between what ISIS, ISIL, the radical Islamic jihadists are doing, and what traditional Islam is about,” Carson said.

“We should focus our efforts as it relates to refugees for the Christians that are being slaughtered,” Bush told CNN, adding only a limited number of refugees should be accepted and safe zones created in Syria.

But President Obama pushed back against these notions at the G-20 summit on Monday.

“Many of these refugees are the victims of terrorism themselves. … Slamming the door in their faces would be a betrayal of our values,” Obama said.

Police officers in Nanyuki town are detaining Esther Njeri, 36, who pulled her kids out ...